After a brief stint with Tumblr, I’m moving things back to WordPress for the time being. With a little .htaccess luck the move should be pretty seamless, but I apologize in advance for anything I break!

From Mark Grimes, this ruby script for Xcode automatically copies the first seven characters of the latest git commit ID to your project’s CFBundleVersion Info.plist key. I’ve been waiting for something like this for a while, it works great and it’s very easy to set up.

From the presentation I’m giving tonight at CocoaHeads Syracuse, here’s an example project on using the SearchKit API in your Cocoa application. Click here to download.

I love the new Panic company headquarters (photos via John Gruber). The look really seems to fit the company’s sense of style and humor.

The iPhone’s built in ringtones are pretty disappointing if you just want a “plain” ringtone, so I always have my eye out for sites like this. RCP Tones is selling their synthesizer ringtone pack at a “pay what you want” price, anywhere from $0.00 to whatever you think it’s worth.

iRingPro’s Zen collection is another good pack I’ve used, although their price is fixed at $10.

It seems like most Cocoa developers are doing unit testing these days. This presentation by Peter Hosey is a great introduction.

Earlier today I bought a new, thicker rug to replace a cheap thin one my Roomba would push across the floor unless I stacked furniture on top of it (in theory the Roomba is supposed to take the work out of vacuuming, but it doesn’t always work this way). Despite hearing about some problems with dark rugs, I decided to pick up a solid black one and see what happened.

It turned out to be as bad as I’ve heard. The Roomba completely avoided the rug, and wouldn’t work at all when placed on top of it. Worse, my initial idea of blocking off the edge sensors by sticking pieces of styrofoam inside didn’t work at all.

It turns out there’s actually an easier way to get it working though. Just put a piece of clear packing tape across each of the four edge sensors on the front of the Roomba. The tape diffuses the light enough to trick it into working. On mine, it worked perfectly. Of course, this will prevent the Roomba from avoiding actual drop-offs, so if you have stairs in your house you’ll want to come up with something else.

BWToolkit is a new Interface Builder 3 plugin that includes some common UI widgets that are missing from AppKit, such as preference windows and styled controls for the new Leopard HUD panel. If you haven’t made your own controls for these situations yet, this is sure to save you some time. I’m looking forward to seeing if this can replace some of my own custom code in Runner’s Log. 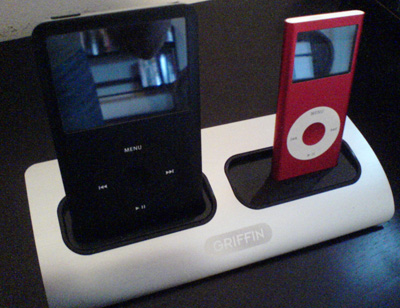 When I bought my iPhone last month I picked up a Griffin PowerDock to bring some order to the number of iPod charging cables I have. For $50, I’m a little disappointed. It didn’t come with an iPhone 3G dock adaptor (I should have read the box more carefully), although you can order one online for around $5 + S&H. Worse though, the iPod Nano 2G dock barely fits, so much that I was almost afraid of breaking it the first time I tried to put the iPod in. Plus, the whole dock is just slightly uneven on the bottom, so despite having a big rubber pad it tends to slide around a lot.

I’ve always been happy with Griffin in the past, I would have expected more from them. It would have been different if it was made Belkin or another mass-market company.

Lately I’ve been thinking about the advantages and disadvantages of one method versus another. Here are the major points I came up with.

No matter which method you use, there’s room to make your application stand out if you put in enough effort. I remember seeing a mock-up of a license file that was actually a generated .gif or .png image. The image looked like a key card, complete with the user’s information and the license key shown as a barcode (the actual license data could be stored in embedded metadata or headers for your application to read). If you use license codes, instead of random numbers and letters you could use a series of four or five letter english words.

For the most part, license files have worked well for Runner’s Log. However, there has been a small amount of overhead that I would have rather avoided. I’m going to keep this in mind for future projects; hopefully this will help new developers who might be in the same position I was. 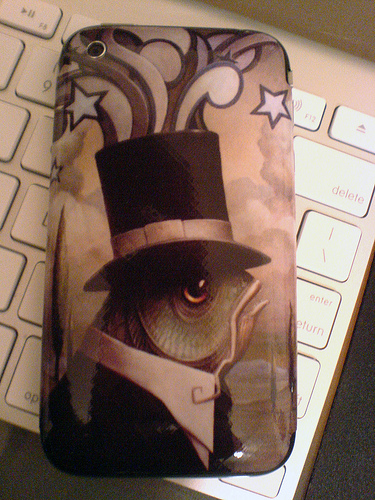 I finally received my Gelaskins order in the mail this week. It looks cool, seems durable, but I ended up with some creases around the corners that drive me crazy when I’m holding the iPhone. The print itself is also kind of low resolution, when you look at it closely. Think inkjet quality, not photo quality.

I’m wouldn’t say I’m unhappy with it or it wasn’t worth the money, but I was hoping for a little more for a $20 sticker.